This week, the Parisian Fashion Week it’s the occasion to talk about one of my favourite French brands, Chloé. Yesterday, Thursday September 27th, the Chloé house has opened its doors of 28 rue de la Baume, in the 8th district, to welcome the Fashion show of the SS18 collection, the first one of Natasha Ramsay-Levi, the new Artistic Director who has been nominated last march. A very eagerly awaited collection for the young designer who was trained at the school of Nicolas Ghesquière, first at Balenciaga and then at Louis Vuitton.

But before getting into details about the fashion show, here is the story of the brand in a few key figures. In 1952, Gaby Aghion, a Parisian of Egyptian descent, had a great intuition: she understood that the haute couture wasn’t just enough to dress women. With her partner Jacques Lenoir, she started drawing clothing that she called “luxury ready-to-wear”. The Chloé house was born. In the Sixties, thanks to the genius of Karl Lagerfeld who was nominated artistic director in 1966, Chloé becomes one of the most iconic brands with its core models, the long and flowing skirts and the fluffy blouses. After Lagerfeld had left for Chanel during the mid-Eighties and the company had been acquired by the luxury group Richemont, it’s up to the young designer Stella McCartney to take over the creative direction. Her vision of a woman romantic and impertinent disrupted the brand’s codes, giving it a new life. The success continued with her assistant Phoebe Philo, who introduced the bags in the runways and created a line of bags, shoes and small leather goods. 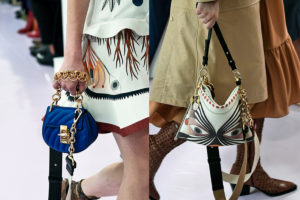 Today Natasha Ramsay-Levi replaces the English Clare Waight Keller, who had continued the legacy of the brand with its flowing and feminine models.

Her collection SS18 has been conceived for a determined woman, who can express her uniqueness. We can find the Parisian house’s codes, still reinterpreted through the image of a strong femininity: so, fluffy fabrics, laces and ruffles, but also an “adventurous” woman in a safari jacket tailored and high laced-up boots, an “urban” woman in a masculine suit feminised by a light blouse and a “romantic” woman in a flowing asymmetric dress with floral prints. The whole show in warm and natural shades – white, ochre, terracotta, gold and silver – who recall the Egypt, the native country of the founder Gaby Aghion. Ode to the irresistible, yet audacious, energetic yet delicate, romantic yet emancipated.