Christmas is coming and, like every year, the Parisian department stores are preparing nice surprises for their windows. Tuesday, November 7, Printemps Haussmann has called a godmother of exception for the launch ceremony of Christmas festivities, the actress and ambassador of the brand Fendi Nicole Kidman, who cut the ribbon in front of the main entrance in Boulevard Haussmann with Paolo de Cesare, the Printemps CEO. 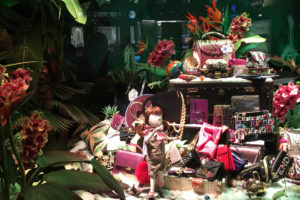 This year, there’s a room for the imagination of the Greek artist Spiros Halaris, who has conceived the display for the eleven windows around the travel’s theme. Specifically, it’s the extraordinary journey of Jules and Violette that the audience can follow all along Christmas time. It is the odyssey of the two children explorers – created by the puppeteer Jean-Claude Dehix – looking for the world’s most beautiful gifts; they take any mean of transport, from the train to the airplane, through the balloon that leads them directly to Paris, at Printemps, their arms full of wonderful Fendi presents such as miniatures bags and shopping bags.

New this year, Printemps chose to rely on different brands, whose guest of honour is the house Fendi that hosts the 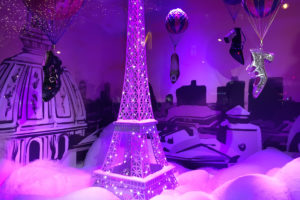 two main windows as well as the Atrium inside the department store. Also new this year that may seem even more surprising is the marriage between luxury brands such as MCM and the red train Thalys or Fendi and the king of low-cost companies, Easyjet. Luxury and low-cost? According to the Fendi CEO, Pietro Beccari there’s no contradiction between these two because luxury consists of the time you may spend for the journey and not in the means you use for travelling. 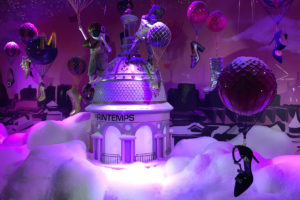 For all the fashionistas like me with an “addiction” to shoes, a necessary step in order to really get carried away in the most enchanting atmosphere it’s the window of the shoes that travel on the balloons next to the Eiffel Tower: from the Jimmy Choo’s Cendrillon to the Manolo Blahnik’s Hangisi, your eyes will be dazzled by all those glimmering creations. Don’t forget to write a brief letter to Santa Claus, your dreams will be fulfilled…in the meantime, go to Printemps Haussmann for a daydream.