While I was in London, last weekend, I had the chance to discover new sources of inspiration for my blog and to dive into English fashion. During my strolls down to Oxford Street and Bond Street, next to the big names such as Jimmy Choo or Manolo Blahnik, there was an accessories brand that had immediately drawn my attention: Anya Hindmarch. And this style is not so easily overlooked. Anya Hindmarch is an English designer and founder of her eponymous brand. 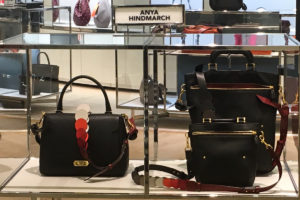 Born in Malden in 1968 into an entrepreneurial family, at 18 Anya went to Florence to study Italian. While in Italy, she noticed that all the fashionable women used to wear a drawstring leather duffle bag. Once she returned to England, she decided to import some bags from Italy thanks to the money she had borrowed and to send one of those to the Fashion magazine Harpers and Queen. She sold five hundred bags through the magazine. The brand Anya Hindmarch was born. In 1992, her bags were available at luxury multibrand stores in London, New York, Japan, France and Italy. Her first flagship store opened at Walton Street in London in 1993. Anya Hindmarch describes her pieces as high-quality workmanship products and her philosophy “British, humorous and personalised”.

Today, she has more than fifty stores all over the world, between Europe, the United States and Asia and in 2016 she has been awarded as Accessories Fashion Designer of the Year with three prizes, the British Fashion Award, the Elle Style Award and the Glamour Women of the Year Award.

So, what are the reasons of my crush? First, the concept of personalisation. Today there are six Anya 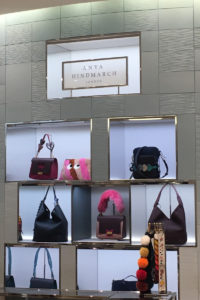 Hindmarch Bespoke stores, where customers can have drawings or messages in their own handwriting embossed by craftsmen. This is one of the basic principles of the brand, that had already launched in 2001 a “Be a Bag” line, by which customers could have a bag personalised with their own photograph, initially in order to support breast cancer awareness campaign, then for other charitable causes.

Another brand’s key element is the funny side, typically British. The style is immediately recognisable thanks to the vivid colours and the shoulder straps often declined in original shapes: hearts, circles, links, etc. The most famous handbags are decorated with eyes, for example, or other kind of funny and colourful stickers such as those of the All Over Stickers Collection that cover the bags, the straps and the sneakers. All the models are made in England with extremely accurate finishing and very selected leathers without forgetting the practical aspect, particularly in the pockets and interior storage.

Curious about Anya Hindmarch’s creations? For the more conventional Parisian, go visit the stores at Bon Marché and Galeries Lafayette; otherwise, you can click on the e-shop. Enjoy your shopping!