Parisian Fashion Week is over since more than ten days but it does not cease to draw our attention. On September 28, the party for the launching of the capsule collection Claudia Schiffer X Aquazzura has taken place in the sumptuous setting of the Hôtel d’Évreux located at 19, Place Vendôme. For this occasion, a sneak-peek of eight models of shoes were carefully displayed in a room decorated with clouds – a wink to the top model’s nickname, Cloudy – with the attendance of the German top model, 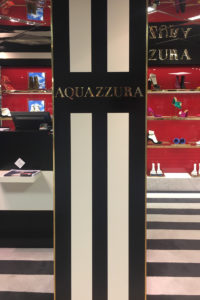 who was in Paris to sign the book’s copies celebrating her 30-year career, and of the artistic director, Edgardo Osorio.

Why would Claudia Schiffer, one of the most influential supermodels of the 90s, have selected Aquazzura? “I had been a huge fan of the brand and have been admiring them from afar”, she admitted in an interview. Who would dare disagree with her…

For those who don’t know it yet, Aquazzura is an Italian luxury footwear brand made in Florence. Despite its short history, it has been founded only six years ago, the brand is now available in more than 58 countries and 300 retailers in the world. The reason of such a success is called Edgardo Osorio, the co-founder and artistic director of Aquazzura. The young designer born in Colombia and raised between Miami and London, after his graduation at the Central Saint Martin College of London, took his first strides working with the most prestigious luxury fashion and accessories brands. When he was only 25 years old, Osorio decided to launch his luxury footwear brand Aquazzura, in 2011. His magic formula? A careful balance between the modern design and the Italian craftsmanship that allows him to create refined and extremely comfortable shoes. It is no wonder that his creations have conquered the heart of Hollywood celebrities and also of Claudia Schiffer.

The capsule collection is inspired by the various styles that represent different moments in Claudia Schiffer’s life. 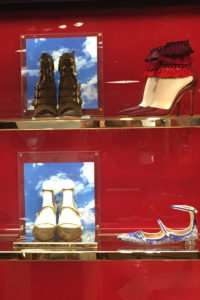 For example, the model Claudia Schiffer wore for the launch party is called Vendôme Boots and these are boots with stiletto heels, laced-up and with golden buckles that remind the French Vogue period. The Cloudy model, which is declined in flat ballerinas or in chunky heels pumps, is decorated with small clouds that recall the top model’s nickname. From the sandals to the boots, they all have the signature Aquazzura with a touch of Claudia, a sophistication and sensuality like Claudia. As the artistic director Edgardo Osorio said: “Claudia is not just an icon. After years of experience in the field of fashion, she has developed a surprising eye. It was a great pleasure to work with her and to create this capsule collection. We love her”.

If you want to look like Claudia Schiffer, go visit the stores Aquazzura, the flagship and the retailers, its website, Net-a-porter or the website of Saks Fifth Avenue department store in New York.