Fifteen years after the closure of the fashion house Yves Saint Laurent and a few weeks after the death of his partner and philanthropist Pierre Bergé, Paris pays tribute to one of the most famous couturiers of the Twentieth century, “le petit prince” of fashion. Tuesday, October the 3rd, the project of the first museum dedicated to a fashion designer, the Musée Yves Saint Laurent, was finally launched. The hotel particulier of the avenue Marceau that had hosted the fashion house until its acquisition by François Pinault in 2002 and then the Foundation Pierre Bergé-Yves Saint Laurent, has now become a museum.

A museum not like the others that alternates the retrospective to the full immersion into the intimacy of the artist. 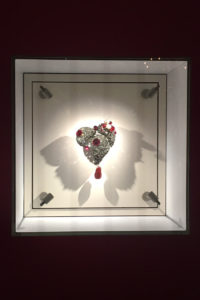 A tribute to the talent of the designer supported by the will of his partner and cofounder of the house, Pierre Bergé, who wanted to make it last and spread it over time the work of Yves Saint Laurent. At the ground floor we are welcome by the famous portrait of Yves Saint Laurent painted by Andy Warol and  then starts the journey through the creative process of the couturier. Yves Saint Laurent, after spending his youth in Alger, studying drawing and a career at Christian Dior as assistant and then artistic director after he died in 1957, meets the man who will change his destiny, Pierre Bergé. With him, he founded his own fashion house in 1962 and begins to rewrite the history of French fashion.

Here’s the second room that dives us immediately in the darkness of the iconic clothes of Yves Saint Laurent’ style: from the suit to the safari jacket, from the jumpsuit to the trench-coat, they all have one thing in common, they belong to the male wardrobe. The adoption of this wardrobe and its adaptation to female body have helped create the Saint Laurent style that has “empowered women”, by accompanying their emancipation. 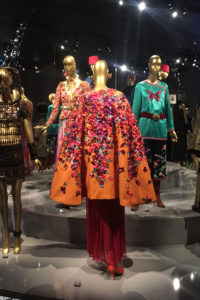 The exhibition continues through the designer’s sources of inspiration, from Spain to Africa, from India until Russia, the exoticism of far off lands. As he used to say: “The most beautiful journeys I’ve ever made, I made them by the books, on the couch, in my living room”. A cloth we can’t stop admiring is the beautiful orange cape covered by embroideries of bougainvillea that evoke the Majorelle garden in Marrakech. But the creations of Saint Laurent are also an itinerary through the history of fashion and its different eras: vestals of the antiquity, dresses of the Renaissance, dresses of aristocrats and courtesans, they all follow the evolution of the society according to the plenty of currents that defined it.

By the staircases we reach the central room of the visit, the Studio and it is not without emotion that I walked through the door. The sobriety and brightness of this location strikes for the contrast with the lavishness of the other rooms of the hotel particulier. The atelier where Yves Saint Laurent  used to work for almost thirty years is perfectly matching with the atmosphere he needed. At the end of this neutral and large space, the mirror occupies the entire back wall, as to highlight its main role: this is where the designer used to examine the reflection of the model to appreciate the dress. But the most affecting/moving element is the desk, stunning in its simplicity: a wooden plank placed on two trestles. Here we can find his favourite objects, his pencils, his eye glasses, his white coat on the edge of the chair and the bowl of his dog Moujik. And it almost feels as if the soul of the designer could arise at any time and start working. 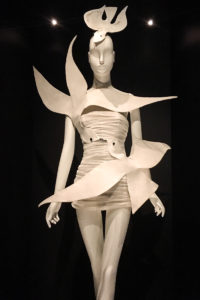 Behind the scenes of the fashion shows, the drawings of the sceneries in front of the jewels of the collections, the wedding dress that reproduces the doves of Georges Braque, the exhibition ends with the link with art that was so inspiring for the creativity of Yves Saint Laurent. Le petit prince of fashion says goodbye in the video where he takes his leave in 2002 but his memory will live forever.