The 84th edition of the international exhibition dedicated to the world of footwear The MICAM (Mostra Internazionale Calzature Accessori Macchinari) took place in Milan in the Fiera Milano from 17th to 20th September. 1441, 799 of which were Italian and 644 international, were the exhibitors who participated in this tradeshow that is for sure the leader among the other exhibitions in this field worldwide. A living and flourishing exhibition that represents the highest expression of creativity and quality of a leading sector of Made in Italy with more than 77000 employees.

Many new issues for this edition: as for the continued re-launching project that started last February, the Hall 3 has a brand new look that shows the greatest names of shoes world next to the new emerging talents. The allegorical journey into the circles of Dante’s Inferno continues with the Seduction that replaces last edition’s Luxury to tell the beauty and the quality of the artisanal Italian footwear, an icon of uniqueness and an expression of an elegant and sophisticated style. In order to highlight the authentic and cultural identity of the Italian footwear, the Fashion Square, the area dedicated only to the most prestigious brand of the tradeshow, has hosted for its first time, in addition to Fendi, Gucci, Salvatore Ferragamo, Prada and Tod’s, some of the most important names such as Giorgio Armani, Dolce & Gabbana, Jimmy Choo, Sergio Rossi, Ermenegildo Zegna. 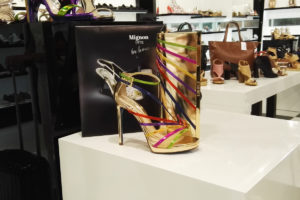 Last, but not least, the selection of the dates that reflects the will to create a real synergy between the exhibition and the calendars of Milan Fashion Week: for the first time, the last day of the exhibition, the 20th of September, coincided with the opening of the Fashion Week Milano Moda Donna. A strategic overlay that has the purpose of making over time the city of Milan a real symbol of Made in Italy.

The promotion of the excellence of the Italian manufacturing industry and the defence of the authenticity of each pair of shoes made in Italy, the real challenge for the MICAM, involves also enhancing the uniqueness of Made in Italy, that is why is important to fight against counterfeiting, which is actually one of the central themes of the exhibition.

For the professionals (and for the fan of shoes like me), the next meeting is on 2018, February the 11th for the next edition of the MICAM.