From 26 August to 14 October, the Italian brand Gucci is the guest of honour at the department store Printemps Haussmann. Five windows converted into projection rooms as well as the Atrium host the creations of the talented Artistic Director of the Florentine company Alessandro Michele, on the underlying theme of cinema. For seven weeks, this Parisian temple of Fashion is turned into an imaginary cinema whose source of inspiration, historical but also cultural, remains Paris. 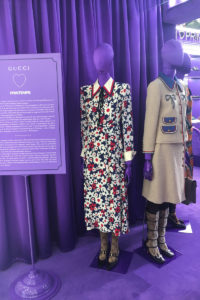 A tribute to Paris of Renoir, Truffaut and Rohmer: the mythical Paris that embodies so perfectly the retro style and glamorous look chosen by the Italian designer.

Before diving into this magical location, a brief flashback about the history of the brand and the paw of its last Creative Director.

Gucci, leading player of Kering group, is one of the oldest Italian luxury companies. Its origins go back to 1921, when Guccio Gucci, Italian immigrate who used to work for luxury hotels in Paris, on his return to Italy decided to open some small shops in his native city, Florence, specialised in leather goods but also travel accessories and horse riding. The horsebit and the stirrup would become enduring symbols of the Fashion house, as much as the bags with the bamboo handle, the loafers with the horsebit or the GG logo created in the Sixties that would represent the iconic models. 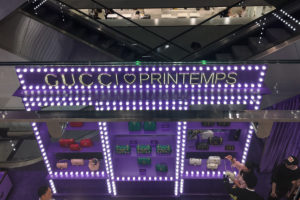 After the development in Asia and Tom Ford’s era, in 1999 Gucci is acquired by the former PPR group today Kering and is now living a new life thanks to the genius of Alessandro Michele who followed Frida Giannini in January 2015. 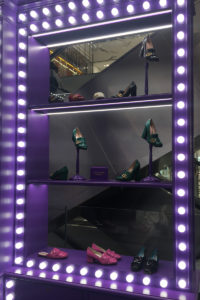 “His opulent vision, rich of symbols and ultra-couture details, overcrowded with strange creatures often embroidered with sequins”, has caused a real aesthetic revolution. Since then, he keeps on revisit the codes of the house with his exuberant and quirky imagination in order to tell new stories. On the occasion of this partnership with the Printemps, he created nine exclusive models “Gucci for the Printemps”, three of which are dresses and the line of bags and loafers “Marmont 2.0” in an original green that will be unveiled in worldwide preview in the department store.

What will be the next film show?