Who is behind the nickname Fabergé of footwear? One of the most famous shoe-designer of the Twentieth century, Roger Vivier. Born in Paris in 1907, two years after beginning his studies at the Ecole des Beaux-Arts, he quits all to dedicate himself to the shoe training. His passion for the theatre and the music-hall incites him to create his first made-to-measure pairs of shoes for the queens, Josephine Baker and Misstinguett, that he had run into in the backstage while he was drawing the sets.The success of his creations earned him the nickname of Fabergé of shoes, because he conceived shoes like sculptures. In 1937, Roger Vivier opened his first boutique in rue Royale in Paris. All the Hollywood celebrities are at his feet: from Ava Gardner to Elisabeth Taylor, all the actresses swear by him and wear only his models. His reputation spreads until England: Queen Elizabeth II ordered the pair that she will bring on her coronation, in 1953. 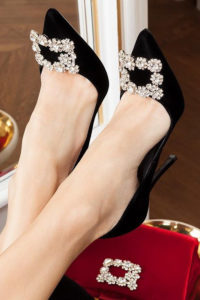 His career was at his height when he was creating the stiletto heel in 1954, this magic and very thin detail that, as he said, “completes the silhouette with a stroke of a pen” and conquers the heart of all the women, by beautifying their look/pace. Before becoming the specialist of the heels, he collaborated for ten years, from 1953 to 1963, with Christian Dior and dedicated himself to decorating shoes with original materials such as satin, silk, ribbons, pearls and jewels. In 1963 he invented the heel which became his signature, the Virgule heel, fleeing towards the front of the shoe then pronounced in the middle rearward. Whether this is daily shoes or fairy tale shoes, Roger Vivier gives to all his creations the same elegance, the same perfection, the same accuracy.

A pair of Roger Vivier pumps could be compared to the “little black dress” that every woman should have in her shoe shelf.

After collaborating with Yves Saint Laurent, having dressed Catherine Deneuve and Brigitte Bardot, he kept on 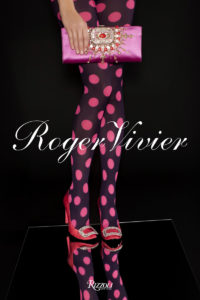 creating these fabulous shoes like works of art until his death in 1998.

The house Roger Vivier has been acquired in 2002 by Diego Della Valle, the CEO of Tod’s group, who gave it a new life with a new opening of a flagship store in rue du Faubourg Saint-honoré but especially thanks to the choice of Bruno Frisoni as Artistic Director and Inès de la Fressange as the ambassador of Vivier style. In 2013, the publishing house Rizzoli published a book to celebrate the talent of this shoe-designer with unpublished pictures, sketches and some details of the most recent creations.