To celebrate the 70th anniversary of the creation of the house of Dior, the Parisian musée des Arts décoratifs hosts, since the 5th of July, a wonderful exhibition dedicated to the couturier “Christian Dior : couturier du rêve”. The retrospective exhibition brings us into the universe of Christian Dior and the one of the designers who succeeded him, from Yves Saint Laurent to the current Artistic Director Maria Grazia Chiuri. The musée des Arts décoratifs environment seemed natural, 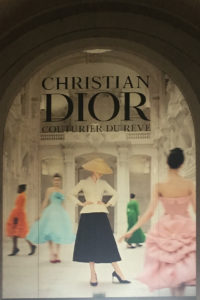 given the attachment that Mr Dior had to this Parisian museum and given that this one had already hosted the first exhibition on the House in 1987 for its 40th anniversary.

A selection of more than 300 haute couture dresses created between 1947, year of the first fashion show, and the present day opens itself to the visitors in a tour that takes place in the areas dedicated to fashion and in the nave, that is almost 3000 square meters: something really breath-taking. Thanks to the opening of the house’s archives, the dresses are displayed in the most wide-ranging way, alongside the atelier toiles and fashion photographs, as well as hundreds of documents (sketches, illustrations, letters and notes and advertising documents). 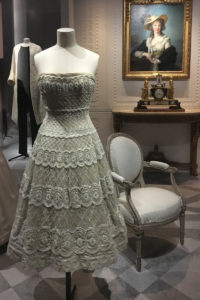 Red wire of the retrospective exhibition, art and the links that the house nurtures with this world since the beginning for Christian Dior was above all an art collector and a decorator fond of the 18th century, before discovering his way of couturier, had opened at the end of the Twentieth two galleries in Paris where he had displayed an exhibition dedicated to Surrealism. To the influence that art had on Mr Dior’s creations is dedicated the first hall that follows the designer’s life before dedicating himself to fashion, from his childhood in Granville to his training in fashion drawing, through the paintings, sculptures and art objects that inspired him throughout his career.

Continuing the visit in the nave, always in chronological order, we discover the founding spirit of Mr Dior and his 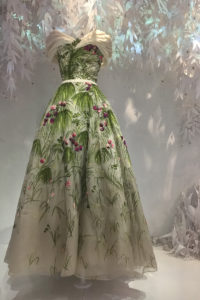 legacy with his most beautiful creations of the last seven decades, from 1947 to 2017, particularly his famous “Bar” suit in black and white that unveils this tour.

A set that concentrates all the novelty of the Dior aesthetics of his first collection “New-Look”: a vision that has totally revolutionised the image of the woman of the years of war. The silhouette of Dior woman is that of a flower-woman, that draws a body with sinuous curves, soft shoulders, highlighted breast, slender waist and hips enhanced by the skirts in shape of corollas. Christian Dior has been credited with revitalizing post-war industry, by using long lengths of fabric and by enhancing the couture thanks to the fundamental role assigned to embroideries and to parures. The invention of an international fashion did allow him to reaffirm the role of Paris as the capital of fashion. 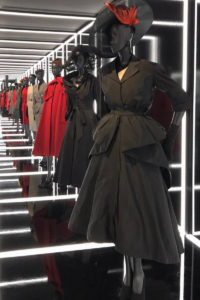 The Dior spirit has been developed after his disappearing in 1957 thanks to the talent of his successors, from Yves Saint-Laurent to Marc Bohan, through the flamboyant touch of Gianfranco Ferré and the punk side of John Galliano, until the minimalism of Raf Simons and the engaged vision of femininity of Maria Grazia Chiuri. Six galleries reveal their way of reinterpreting the codes of Dior within the same art sensibility and the same vision of haute couture.

The savoir-faire and the technique which underlie haute couture are unveiled through these 300 dresses in an atelier that shows the “petites-mains” at work, surrounded by dressmaker’s dummies, sketches and canvas. The evolution of Dior allure since 1947 is summarised in a gallery through dresses and excerpt of fashion show videos. 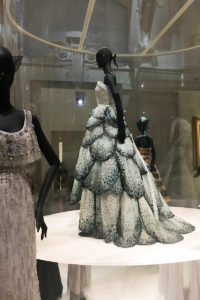 The magic of the surprise of the grand finale works in the sumptuous setting of the nave, thanks to the genius of Nathalie Crinière. When couture becomes art because “At the bottom of every heart slumbers a dream, and the couturier knows it: every woman is a princess”. Thank you Christian Dior for fulfilling our dream. 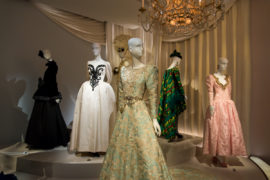