How being in the Italian capital of Fashion and not benefit to find the inspiration for my next article? Walking down the most renowned street of the famous “Quadrilatero della moda”, via Montenapoleone, during my visit to Milan my eye was attracted/hit by the numerous brands of the luxury stores and their wonderful windows. A choice had yet to be made but it was a very complicated task. 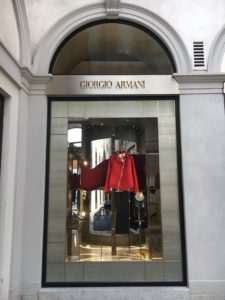 Finally, it’s an old building that drew my attention: the flagship store of the king of Made in Italy Giorgio Armani. A sumptuous building of 1835, Palazzo Taverna, that has been entirely renovated for the reopening of the flagship store two years ago,  for the Expo 2015 and in order to celebrate the 40th anniversary of the Italian designer’s career. A new concept for a 1082 square meters store on three floors: by keeping the original building’s architecture, each floor shows a sequence of rooms linked together by some gates with platinum finishing touches. “A store with an elegant atmosphere that hosts the clients and leads them into the different rooms” as defined it the couturier “in which the sequence of the colours in the rooms, the careful display of the items, the surprise created by the interior staircase give life to a typically Armani experience: deep yet natural”. A perfect example of the Armani style, an understated elegance but with an extraordinary first-class.

Everyone knows this name but few people maybe know the reasons behind the nickname “Re Giorgio”. Giorgio

Armani got close to the Fashion world nearly by accident, leaving the Milan Faculty of Medicine in 1957. After his debut as merchandiser in the famous department store La Rinascente, he met the talent scout who first believed in him, Sergio Galeotti and started to draw his first collections. Together, they founded the Maison Giorgio Armani, in 1975. The typical elements of his style are already present: the reinterpretation of the men’s blazer for women, the pieces, the softness of the tissues, the shaded hues. The path towards the success was already carved out. The movies of the Eighties appointed some actors as icons of the elegance and the Italian style: one on all, Richard Gere dressed in Armani in American Gigolo.

Giorgio Armani talented designer but also visionary entrepreneur, one of the first to understand the necessity of cheaper ranges: hence the creation in 1981 of lines like Emporio Armani, Armani Jeans and in 1991 of Armani Exchange. In the 2000s, the intuition of the need of differentiating itself in order to make his genius accessible to everyone is continuing through the lines Armani Collezioni, EA7 and Armani Casa. Not to forget the Armani fragrances that became a world-wide success as well as the make-up Armanibeauty, both a result of the agreement with the luxury cosmetics leader L’Oréal.

Last sector to be conquered by Re Giorgio, the hotel industry: in collaboration with Emaar company, Giorgio Armani opened the Armani Hotels & Resorts, an expression of the Armani lifestyle, the first in Dubai and the second in Milan.

From the catwalks to the red carpet of his haute-couture line Giorgio Armani Privé, through the promotion of young designers that present their fashion shows in his Teatro Armani, the empire of the king of Made in Italy isn’t about to stop. Hats off to Re Giorgio.