The 2017 Roland Garros edition provides two surprises: first, the presence of a new ambassador for Lacoste and…a customisation workshop of the Lacoste polo purchased in one of the shops of the stadium. This week, I had the opportunity to attend one of the most coveted events of the season: the Roland Garros tournament, one of the four of the Grand Slam international circuit. As you already know it, it is a social event that gathers a lot of celebrities, 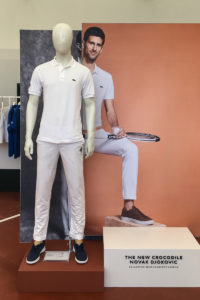 Lacoste is still in its role of official sponsor, a collaboration that is long-standing, and it has provided two novelties. First of all, it has a new ambassador: the number 2 and Roland Garros defending champion, Novak Djokovic. To celebrate its 85th anniversary, the brand has decided to focus on the Thirties silhouette in black and white of René Lacoste and the colour one of Novak Djokovic, by mixing the two. Before being identified with the today’s famous polo shirt, Lacoste was the surname of a talented tennis player of the Twenties, René Lacoste. And the outfit of the players at the time were a long-sleeves shirt and a pair of trousers. Become the world number 1, in 1933 René Lacoste had the idea that revolutionised the world of sport: create a polo shirt in pique cotton. The polo Lacoste with the emblem of the crocodile, born from the nickname the alligator that an American journalist had given to him at the end of a Davis Cup match in the US, was born. And the brand Lacoste thus emerged, by entering the world of fashion and of legends. Between the most famous ambassadors, we can count Yannick Noah, Gustavo Kuerten and Guy Forget.

Second novelty, Roland Garros hosts this year a stand Lacoste, located at the heart of the central avenue between 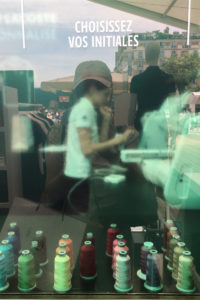 the Philippe Chatrier court and the Suzanne Lenglen, with a customisation workshop. After a focus on the two tennis protagonists, the founder of the brand René Lacoste and the champion Novak Djokovic, we notice in the background on the right the workshop that provides the ability to customize the polo shirt. With any purchase in one of the shops of the stadium of a polo shirt for women, men or kids, you have the possibility to have your initials engraved, or on your left sleeve as it’s for Djokovic, or for women on the waist. Novak’s outfit, that makes its debut here and provides a blue, white and red polo shirt like the colours of France but also of the Serbian flag, is a part of a limited edition Lacoste X Novak Djokovic, available in all the Lacoste stores.