“Manolo Blahnik : The art of shoes ”  is the title of the exhibition dedicated to the iconic couturier that hosts 80 drawings and 212 shoes in Palazzo Morando, located in the heart of the fashion district in Milan, and that was opened on January 26. It is an absolute first as part of the celebration of the 45 year-career of the Spanish designer who has specifically chosen Italy and, in particular, Milan. 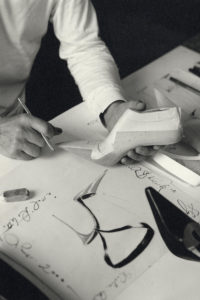 The real Manolo Blahnik’s connoisseurs shouldn’t be surprised by this choice. His relationship with Italy it is a strong and old one. Blahnik has always been fascinated by Italian art and architecture, from the Renaissance to the Baroque, but also by the golden age of Italian cinema, the Luchino Visconti “Il Gattopardo” a prime example. And Milan would appear as a forced choice, not only for its role of capital of Fashion but also for its role of core city of Italian craft tradition: this is where Manolo Blahnik factories keep on making those beautiful shoes since 1971.

“It’s my second family!” tells Manolo about his craftsmen from Milan. “It’s already been several decades since we work together. It was Anna Piaggi –the ex Vogue Italy editor-in-chief – who introduced us. She was incredible, curious, brillant, she was always one step ahead”. 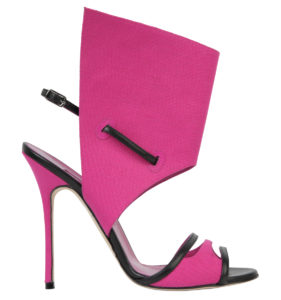 “When you enter to Manolo Blahnik’s universe” explains the director of the exhibition Cristina Carrillo de Albornoz, “in this enchanting labyrinth, you realise that his work becomes art. A Manolo Blahnik’s shoe is, at first glance, a creation that represents in an exquisite and harmonious way the full range of colours by volumes and by form and, secondly, it shows all its craft value, its quality and beauty”.

The shoes models are displayed in glass cases like genuine works of art. As modern pieces, they are a product of art, craftsmanship, eclectic inspiration, fashion and imagination, a perfect example of clothing and design history. 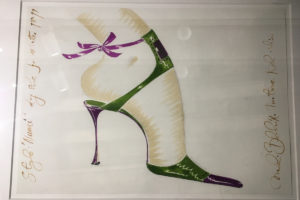 And because any work of art goes through the initial creation stage, the drawing, the exhibition unveils us a selection of the original designer’s drawings. It seems that Manolo Blahnik took the gift for drawing after his mother. He claims that the only thing he never had to learn is how to hold a pencil. It came naturally to him. During the shoes creative process, Manolo draws all the models by hand, because he doesn’t trust the computer. And he always moves with his pencil and his notebook under his arm, for his insights can emerge at any time, during his strolls or his plane trips.

The eighty drawings displayed in Palazzo Morando they aren’t simple sketches but rather works of art in themselves, created with a pencil, in china ink, or painted in watercolour. Some of them represent initial insights waiting to be developed some others have been painted only after, once he finished the shoes. Those last ones are actual portraits of his creations that turn shoes into models. 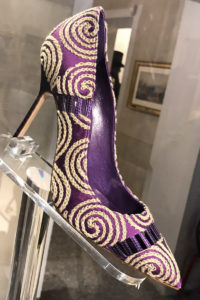 The 212 shoes, selected from the 35 thousand pairs of his personal collection, draw a picture about the evolution of shoes, aesthetics and femininity. The exhibition tour leads us through the different rooms into the fairy-tale and sophisticated world of this extraordinary artist. Pumps, slippers, sandals, boots, every model tells a story and enchants us in a glittering swirl of colours and jewels. From art to architecture, going through nature and cinema, regardless of the inspirations, the common theme is still the same: make women shine thanks to the clever play of stilettos, precious fabrics – satin, silk, brocade and velvet – and silver, sequins and crystals. All this orchestrated by the incredible talent and the extravagance of this fashion genius.

If you too you are seduced by those objects of desire that are the “Manolos”, rendezvous at Palazzo Morando in Milan, the exhibition ends on April 9th and will then reach the cities of Saint Petersburg, Prague and Madrid.